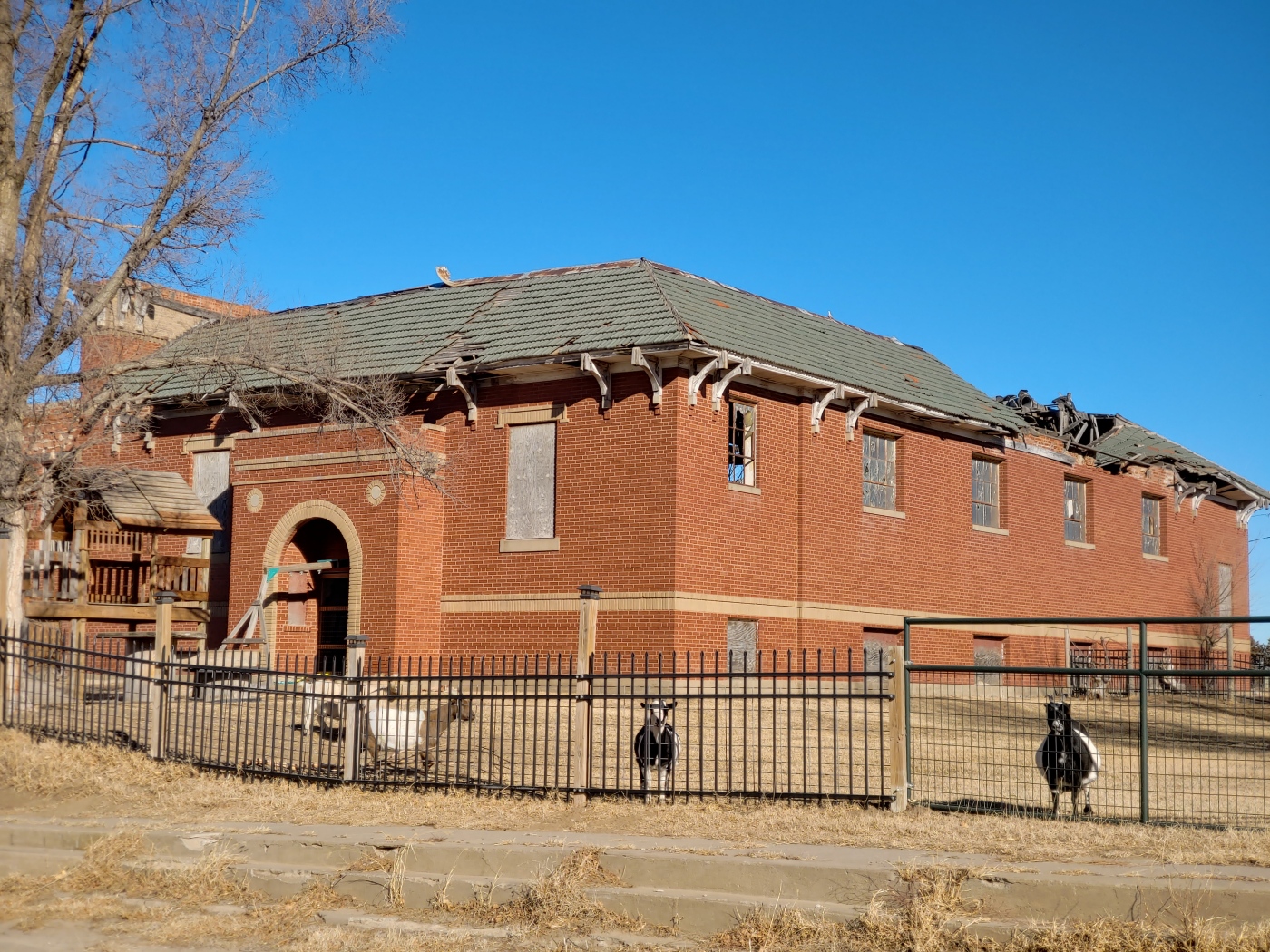 Ford is now a shadow of what it once was. I lived there for about five years and was shocked to learn my street (Prairie Street, natch) had once been paved. Keeping up with maintenance became too costly as the population dwindled, so the City dumped dirt on top of the asphalt and just rolled with it. When the dirt gets worn and washed away, you can still see the asphalt below. Along with paved roads, Ford once had an elementary school and a high school, as well as passenger train service to Dodge City. By the time I bought a house there, even Ford’s liquor store had closed.

But in 1912 (two years after my former house was built), things were happening in Ford!

Unlike their neighbors in Dodge, the people of Ford didn’t mess around with kids in overcrowded classrooms and they had the new building ready for occupancy the same year. The news snippet above referred to the new building as a high school but as you can see below, it was a school for all grades.

The structure completed in 1912 (prior to the addition of the auditorium at the south end) wasn’t very big but there were only five students in the first graduating class of 1916.

Ford took their sports ball contests quite seriously and enjoyed considerable success for such a small school.

But what the heck? They then beat Garden City the following month, after having eggs thrown at them while waiting for their train in Dodge. Such drama. They couldn’t have been playing Dodge and Garden varsity teams…right?!

By 1917, the lower grades were bursting at the seams with as many as three grades stuck in one classroom. A local home was rented for additional space and newspaper editorials called for a second school. This time, the residents weren’t so quick to jump on another bond issue. Instead, they built a detached Vocational Agriculture building at the north end of the school.

Since one of the rooms was being used as an auditorium, it made sense to build a real gymnasium/auditorium and free up more classroom space.

That was long but you need to understand that I didn’t even include all of it. You’re welcome.

They were trying to put Ford on the map!

I can’t remember when the elementary school was built but it screams 1950s to me. The 1956 yearbook includes some photos taken from the baseball diamond with the elementary school in the background. I mention this because high school events often took place in the grade school, presumably because it was newer and (I think) larger.

The Class of 1972 was the last to graduate from Ford High School. It was all quite messy. For the Fall of 1971, the Ford High School football team was only able to schedule six games because of apparent interference from the Dodge City USD 443, which governed the Ford schools at that time. I’m guessing the interference was caused by the budget/tax revenue whoopsie. By early September, Ford’s fate had not yet been determined.

I’m not 100 percent clear about how the State handled the fallout but ultimately, Ford and Bucklin consolidated and they all became Red Aces. How weird would it be to suddenly walk the hallways of your competitors…after your town seceded from that district? Totes awk.

One of my neighbors said he and his friends still played basketball in the gym after work for many years after the school closed. The building was used for community events until it became a safety hazard.

A former Ford City Clerk told me the City Council had gotten bids to demo the building but it was ridiculously expensive, especially since there was asbestos that needed to be removed. Some locals thought they could pull the walls down with a tractor because there’s apparently nothing a John Deere can’t do. They were wrong. Pulling on the walls just caused the roof to cave in. So they made it worse and there it sat.

Some lady bought the property and refused to do anything with it. People would try to buy it from her and she would refuse. This went on for years until finally a guy thought he had it bought in about 2011. If I remember correctly, he intended to turn it into condos but there was a ton of cleanup to do. Most of the lot was completely overgrown, to the point where trees had to be removed in order to even get to the building and haul out debris. I remember seeing him behind the auditorium trying to clear a path. Honestly, even back then it was clear the building was too far gone. But then I think something happened to prevent the sale from going through. Probably a lot of things!

I went into the school in about 2007 and it wasn’t yet a total wreck. I remember walking in the main floor hallway, which was concrete and thinking it could be much worse. Then I nearly stepped off into the void. It hadn’t occurred to me that the classroom floors had been wood…at one point. They were GONE. I looked down all the way into the basement locker room and was glad I didn’t take that route to check it out.

The gym/auditorium was a shit show but it was intact enough that I could tell it was a really cool addition. The wood floor was a warped mess (due to the giant hole in the roof) but the bead board around the stage area was still there and I just thought it was a shame to see it ruined. The Google Street View images are from June of 2008 but they’re total garbage so you can’t see much. Please note that the addresses are all jacked on Prairie Street so you can’t even pay attention to them. The satellite image below is also out of date.

I’ve looked all over for the photos I took that day but they must have been stored on an old PC that died ages ago. It would have been really interesting to compare the photos from that day to these that I took in January of this year. The goats seemed to be enjoying themselves!

Note: I did not trespass to get these pics. All were taken from outside the fenced area.

Here’s a bonus gallery of the old grade school, which now houses the City of Ford offices, City Council meetings, etc. The City’s Facebook Page has a few interior photos as well. Residents were also able to reserve the cafeteria and gymnasium/auditorium for family reunions and other events but I’m not sure if that is still the case. When I lived there, the City Library was still open but it closed at least four years ago.

I’m not sure what it is about the Ford school buildings that I find so compelling. The grade school interior isn’t even attractive! But I don’t want either building to be destroyed. They represent a time when the community still looked forward to growth and prosperity. When I look at what we have in front of us now as a country…and western civilization in general, all I see is doom and decay. On that happy note, the digital nomad life continues!

If you like what you see, be sure to subscribe (way at the bottom of the post on mobile devices) to receive an email each time a new post is published and share on social media. You can also buy me a cup of coffee using the donation form. Thanks for reading!

Your support keeps the caffeine flowing! Make a one-time donation. Your contribution is appreciated!