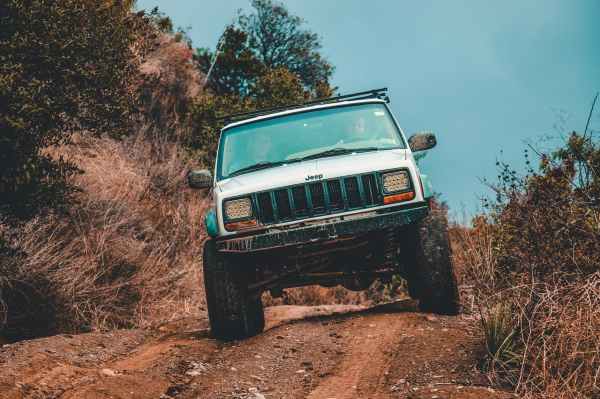 Whose brilliant idea was this, anyway?

We decided to cross the border in Mexicali to save time and money. After being delayed due to a late Amazon package and a bad wheel bearing (not mine), we left Arizona much later than we expected. As a result, the crossing we intended to use was closed for the weekend so we used the busier one on the west side of town.

Being in two vehicles can be a challenge, especially when the leader gets pulled over for an inspection and is extorted to the tune of 3,000 pesos. We sat for a couple hours while they decided what to do with us and the psychotic hound had a panic attack requiring a dose of trazodone. Great start to a nerve wracking drive.

Highway 5 from Mexicali could have been in the US. There was a ton of traffic in San Felipe and the road quickly deteriorated after we left heading south. Little side detours for construction were unpaved and extremely rocky in spots. Some of them included very steep climbs and descents and I thought I would need 4WD a couple times. A large unpaved section that continued for a few miles was a little sketchy, especially considering we were running out of daylight. Views of the mountains and Sea of Cortez were absolutely breathtaking but it was impossible for me to divert my attention to taking photos while driving due to the road conditions. I learned my dogs are not fans of off-roading. My Jeep was absolutely made for those conditions and it would have been fun, had I not been carrying cargo with feelings. I feel like I should get a cheesy t-shirt that says something like “I survived driving Highway 5” but I’m content to settle for bragging rights.

We made it to Highway 1 right before dusk and had no choice but to continue after dark. There were no shoulders and terrible (mostly nonexistent) road markings in most spots. Mountain curves were terrifying after dark. It was impossible to see. We had been up since 4 am and semi-trucks were driving way too fast for the road conditions. We finally made it to a hotel just outside Guerrero Negro at about 10 pm. Lulu wasn’t even talking to me by then.

The lead vehicle lost its fuel pump as we were leaving the next morning so we sat until after lunch and only made it to San Ignacio where we stopped for the night. The rest of the drive was pretty uneventful aside from being utterly confused by Mexican towns and whatever rules drivers seem to haphazardly follow. We finally made it to Todos Santos at about 8 pm the next night and my dogs and I were toast. They weren’t listening to anything I was trying to tell them and I was beyond exhausted. We got the keys to our house and completely crashed.

The drive was better and worse than I expected. It is my sincere hope that I never have to do that again.

Part I of this series can be found here.

It’s weird to write about failure but here we are, in a way. As of today, I have no idea why my great-grandmother was on probation in 1922. I don’t know how she met my great-grandfather or why she lost track of him. What I do know is that Ancestry has been pestering the hell out of me about my DNA matches.

I have so many DNA matches, Ancestry won’t even tell me how many I have. Is it like that for everyone? All it will tell me is that I have 1,000+ matches who are fourth cousins or closer. I’m an only child so that kind of blows my mind. What’s even crazier is I have close matches who are related to me through four different relatives who are not related to one another. That’s another story for another day.

Anyway, Ancestry kept insisting this woman named Ancke Unrauen from Prussia was my fifth great-grandmother. I’m fairly certain I have identified my great-grandmother’s family but I’m not exactly sure which male line she is from because everyone gave their kids the same damned names for several generations. I had made some assumptions but I didn’t want to waste too much time on a theory.

One day, I decided to go full-on CSI and link some DNA matches to my family tree. Ancestry told me I have 12 DNA matches linking me to Ancke from four separate males lines. I spent an entire day piecing that all together. We’re talking about fifth cousins thrice removed! I don’t even know what that means at this point except that I’m related to Mennonite farmers and I now have 1,550 people in my family tree.

I believe I have identified some second cousins who live about two hours from my hometown. I have their names, addresses, and phone numbers. But how does one actually go there? Do you send a letter? I’ve left posts on the relevant genealogy message boards with probing questions and have received no replies so far. I’ve spent most of my life trying to avoid family so I have no idea how this is supposed to work.

There’s a small town in Kansas with a museum that probably holds quite a few answers. I suppose I could call them and start asking awkward questions. It’s strange though; everyone involved in this has died so why is it even awkward for me? I think the whole thing must have been scandalous given the time period so will the current Mennonite community even be willing to discuss it? I once did skip-tracing for a collection agency so it’s not like I’ve never had someone hang up on me. This shouldn’t be a big deal.

This past Friday, I had the honor of shaking hands with 98 people from more than 20 countries and welcoming them as citizens of the United States of America. One of the activities of Daughters of the American Revolution (DAR) is attending naturalization ceremonies and welcoming new citizens with American Flag lapel pins.

I signed up at our last chapter meeting and didn’t realize until the night before that also meant I had volunteered for a public speaking engagement. Say what now? Oh yes…DAR is listed on the program and gives a brief address at each ceremony. Good to know! On the way to town, I was told I could personalize the address to include some information about my patriot. I always hated pop quizzes! I agreed to deliver the afternoon address so I could at least see how it all works first.

When we arrived at the U.S. District Court in Tucson, Security asked straight away if we were the “DAR ladies.” Tell me, was it the red, white, and blue attire that gave it away? We were seated at a table right at the front of the courtroom across from the USCIS officers, one of whom makes the motion to the court for admission of candidates for naturalization.

A gentleman from the State Department provided information about obtaining passports and registering to vote and the judge in each ceremony really spent quite a lot of time stressing the importance of voting. He also talked about the uniqueness of the American experience and how this is the only country in which one becomes an American at the precise moment they become a citizen, regardless of their previous nationality. He said he could obtain German citizenship but never be considered a German (and so on) but that is not the case here.

Wouldn’t you know the afternoon ceremony was packed with so many friends and family they were not all allowed in the courtroom. It really helped my speech jitters to have 48 new citizens plus about 100 supporters, a federal judge, and the other government employees just trying to get through their Friday listening to me talk about our ancestors taking up arms for the cause of freedom. I can never talk about patriot stuff without getting choked up and it’s even worse when I talk about family patriot stuff. Nevertheless, I mostly got through it without my voice breaking and have never been so grateful to take a seat and shut my mouth.

After the Oath of Allegiance, a brand-new citizen volunteered at each ceremony to lead the Pledge of Allegiance. I thought I was in the tear-clear until the video of “God Bless the U.S.A.” started playing. Why was that courtroom so dusty anyway? It’s a health hazard! Speaking of tears, each new citizen and each of their friends and family had the opportunity to speak about their experiences and their reasons for pursuing citizenship. They all had extremely moving stories but the teenage girl who sobbed into the microphone about how hard her mom worked to provide for her family so they could have better lives was nearly my undoing.

After the new citizens received their certificates, they came to our table to receive their pins. We shook their hands, congratulated them, and even took photos of one gentleman with his certificate and flag with his phone. You would never know from being inside that courtroom that we are a nation divided. I checked my text messages after we left the building and saw a national emergency had been declared. There is too much hyperbole and not enough focus on fixing our broken immigration system so that we can have less of what happens at our borders every day and more of what I experienced in that courtroom.

This is something every American citizen should experience at least once. We tend to take our way of life for granted and maybe even think it’s not so great when we watch the news. Forget what the clickbait peddlers are selling to you. I saw for myself 98 people who have endured all manner of hardships to become one of us. As we were walking to the parking garage after the second ceremony, I asked my counterpart how many of these one has to attend in order to make it through without crying and she said she imagines it’s quite a few.