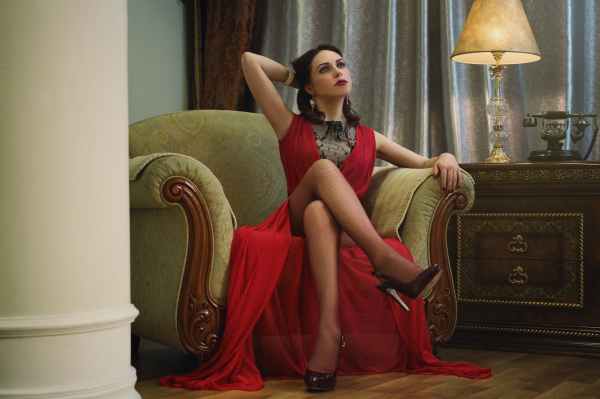 I wear heels to work approximately 90 percent of the time and I’m in my 40s so I’m not exactly a novice. I have several pairs of stilettos in the 4 to 4 ½-inch range that give me no trouble unless I need to run after someone in a parking lot. It happens. That said, the shoes I wore yesterday were literally the worst. The. Worst.

The bands around my toes were awful but something in the structure of the right shoe was causing pinpoint pain in the middle of my knee. I had them off most of the day with my office door closed and I’m still sore from wearing them a day later. My Jeep needed gas but I purposely waited until today because I wasn’t about to stand there filling up in those ridiculous contraptions, hating every second.

Beautiful shoes don’t have to hurt. The pair I have on today are just over 3 ½ inches and they are perfectly comfortable. I take good care of my feet and I resent the holy hell out of poorly constructed torture devices. I kind of feel like anyone who designs shoes which literally cause physical injuries should be sentenced to wearing them permanently by the Court of Fashion. Let their own feet become disfigured by their hellish creations.

On a completely unrelated note: Anyone need a professional shoe tester? Will work for merch. Size 6. Holla at ya girl.

You may think women sitting around complaining in the office are wasting time. You would be wrong. Everyone knows summers in Arizona can be brutal. Most people know HOAs are a scourge to homeowners across the country. Add (wo)man’s best friend to the beige stucco box subdivision mix and you have a big, smelly mess.

That’s right; this is post is about poop. If you’re the least bit squeamish, I suggest you leave now.

Many HOAs disallow outdoor storage of the wheeled trash carts, meaning we have to store them in our garages. That’s fine until the temperature reaches about 80, which covers the majority of the year. So once we clean up after our dogs in the backyard, that trash cart gets RIPE. Thoughts and prayers for anyone who must enter my garage.

I just happened to ask a coworker how she deals with the stench of the dog poop in her garage and she said she uses her daughter’s old diaper pail. *record skipped* Say what now? Parents of human children probably think this is an obvious solution. I, however, am not a parent of human children.

It turns out there are diaper pails specifically made for pets. I read a ton of reviews (so you don’t have to) and was completely unimpressed. They all seemed to be made for tiny pets rather than the vile and disgusting creatures in my home. I only have weekly trash service so a larger capacity contraption was required. I settled on the Diaper Genie Complete because it’s large and it has a foot pedal. Based on the reviews I read, I ordered Target brand refill bags and then basically forgot about it. I must have been drunk shopping again.

When my Target order landed on my doorstep, I was super confused about why the box was so big for such a small grocery order.

I haven’t noticed an odor coming from the pail. I still have some residual stench when I open the trash cart and will continue with the Lysol regimen. Was it worth it? Possibly. Ask me again in June.

I was so close to going on an unhinged rant about vanity sizing. Thank God the Google machine stepped in and saved me from myself.

Not to brag or anything, but I’m a bit of a bargain shopper. I love designer labels but I also know how to be poor so the black pants can come from JCPenney all day long. Worthington has been my office attire workhorse for ages because it’s dependable af. I wait for the sales and then stock up on all of the basics. Unfortunately, they never-ever-ever have size 0 in stock in styles I like. WTF, people. I am not a size 0 but here we are.

My weight has fluctuated over the years and when you’re 5’1”, that can be an adventure. For the past year or so, I’ve been in the 104 to 106-pound range and I’m old enough to remember when that would be a size 5/6 or maybe even a 7/8. When I was in high school, I weighed about 95 pounds and wore a size 3 in Pepe jeans. Remember those? God, those were the days. I couldn’t wear Guess jeans because they were too tight in the legs and too large in the waist but goddamn, those Pepes were small in the waist and big in the ass. They were worth every penny at The Buckle!

So I was on the JCPenney website last night and I saw a Buy 1, Get 2 Free deal on Worthington pants. Game on! I expected the usual disappointment of everything in my size being sold out but I freaking hit pay dirt. THREE PAIRS of size 0 pants are on their way to my doorstep. I’m excited but also wondering if they will be too big. This isn’t a humble brag, people; this is a problem. Inexpensive clothes are just sized differently.

I thought the phenomenon was called vanity sizing but I was mistaken. I stumbled upon an older blog dedicated to this misconception and I stand corrected. A coworker told me this morning that I need to up my game and buy more expensive pants if I want them to fit. Once again, she is 100% correct. It is true that each individual clothing line (even among the same brand) has a target customer and some are sized larger than others. I found this when shopping for Calvin Klein dresses recently. The lower tier sale priced dresses had a different size chart with larger proportions than the higher priced dresses that were not on sale.

So just like with everything else, the key to finding clothes that fit properly without leaving your house is to be an informed consumer. Know your measurements…your actual measurements, not the numbers in your head. Study the size charts and understand that a shift dress will look like a burlap sack on you if you’re my size. Also keep in mind petite lines are for people who are 5’4” and under, not just skinny people. I’ll make the mistakes so you don’t have to. 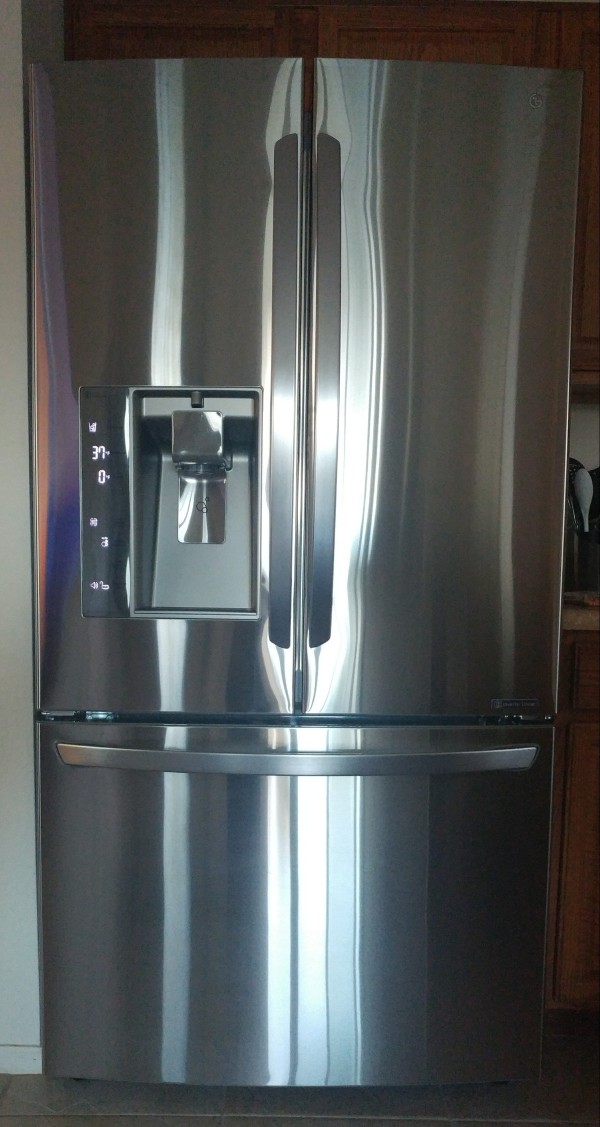 I bought my current home nearly five years ago and have been living with appliances I despise. Everything is builder’s grade. The appliances are different brands and white. Correction: The dishwasher is a sort of dingy off-white. It’s hideous. The refrigerator *was* a ginormous side-by-side monstrosity, entirely too large for the space. I basically have one large open space for my living, kitchen, and dining areas so I could see the white beast in my peripheral vision whenever I sat on the couch. It was just sticking out there like an offensive lineman in a children’s ballet recital.

Costco had been advertising a ridiculous Thanksgiving Day sale so I spent weeks researching a couple LG models. My first choice was that over-the-top french door model LMXC23796S with the glass beer door. I mean, that’s what I would have used it for but you do you. Even on sale and even though I had the cash, I really couldn’t justify spending $2,500 on a glass beer door and extra freezer drawer. That would put a serious dent in the beer budget and I do have my priorities. Thank goodness it was sold out by the time I logged on at 0900.

My second choice was the standard French door model LFXC24726S in counter depth. Costco had it on sale for $1,999.99 and it was in stock. Ebates wasn’t offering cash back from Costco but my credit card was doing 5% cash back on up to $1,500. I was also able to get the Costco Concierge Service at no extra cost, which includes free delivery, free removal of your old appliance, free installation, and it adds another year to the warranty. I pulled the trigger and immediately received a confirmation email with a detailed explanation about their delivery process. It said I would be receiving an email from the delivery company to select a date and then I would receive an automated call with a two-hour delivery window the night before it was set to arrive.

Sure enough, I received an email with a calendar showing available delivery dates. I was already taking December 7 off so I selected that date and was given a confirmation number. I waited for the automated call the night before but never received it. When I woke up on December 7, I just called the phone number on the confirmation and they advised I was on the schedule for between 1245 and 1445. Perfect! The house didn’t need to be cleaned by 0800!  At about 0900, the driver called to say it would be more like between 1200 and 1400. Even better!

We were having a weird desert thunderstorm that felt like monsoon so when the truck arrived, they staged the new fridge in my garage. One guy prepped the old fridge while the other prepped the new fridge. They removed my front door and swapped them out in minutes. Before I knew it, the new fridge was in place and my door was back on the hinges. And then they were gone. I don’t know how this process could have been made any easier.

So about the fridge: If you are feeding a family, a counter depth fridge probably isn’t for you. The crispers are on the small side but I didn’t care about that. It’s perfect for my beer, LaCroix, and frozen lunches. Also, no I don’t love Dos Equis *that* much but Safeway was having a killer sale.

If anyone in your life has ever been confused by pushing buttons to dispense ice and water, you’ll love LG’s separate dispensers.

The slim ice maker in the door is pretty amazing as well.

The freezer has an extra ice container and it has three levels so you don’t lose your bottle of Tito’s under a bag of fish sticks.

It’s so beautiful, Lulu (the Psychotic Hound) guarded it for more than an hour. No nose prints…yet.

It’s quiet, even when making ice. I’m 5’1” and I had no trouble reaching the top shelf. Basically, I’m in love.