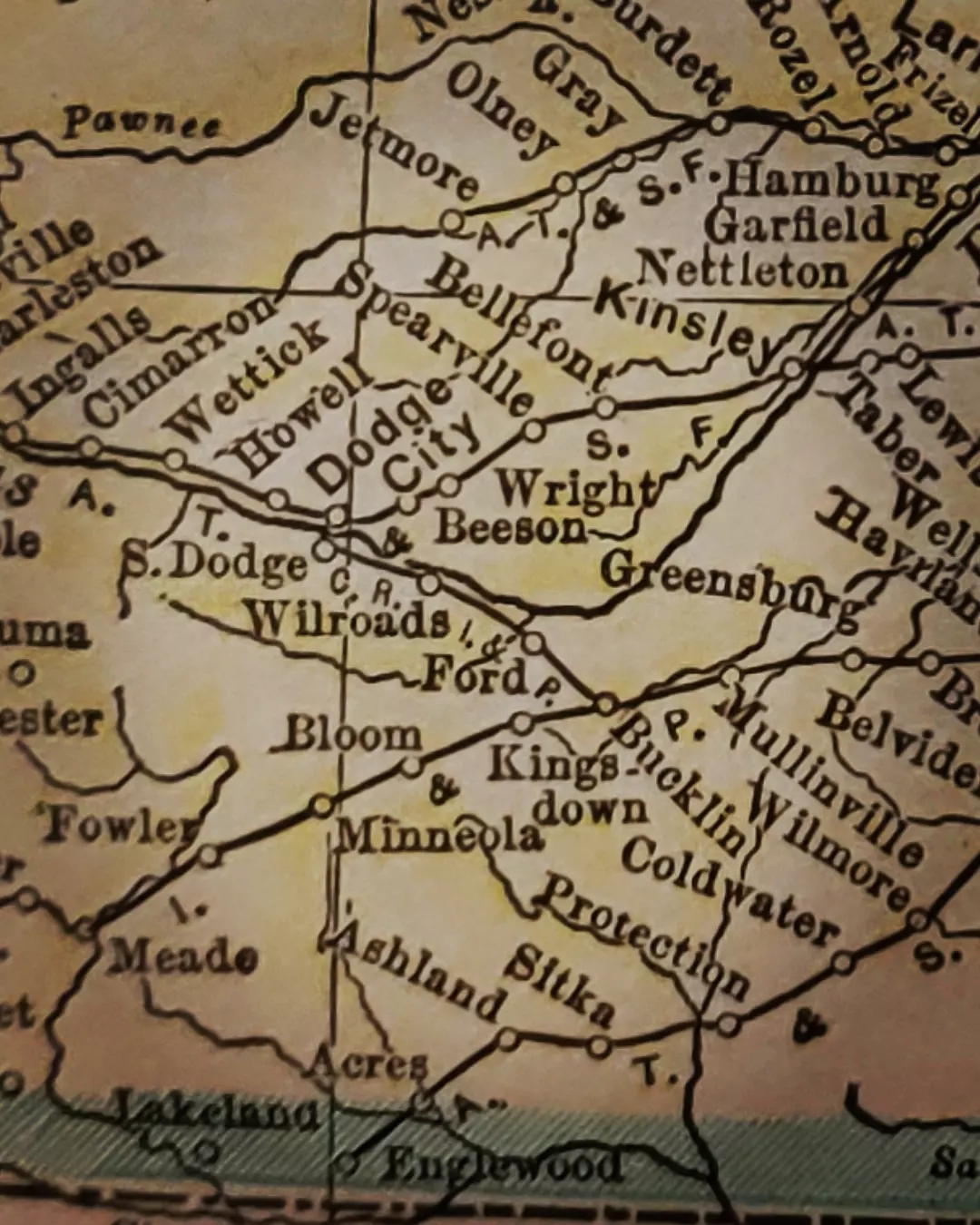 Do you ever wonder about those obscure dots on the maps that meteorologists point toward during their forecasts? You know, the dots on roads you’ve been using your entire life and you are absolutely certain that there is no “there” there? For Kansas people, Sears and Buttermilk are good examples. I really thought Merril Teller was crazy.

Ever since I received a 1936 world atlas as a gift, I’ve meant to look up the dot on the Kansas map that says, “Beeson.” Like you, I’d never heard of it. I would definitely remember if my grandmother had mentioned a train station named after the family!

It seemed like AT&SF archives would be a good place to start but that isn’t as easy as it sounds. I found a time table from 1873 that was for employee use only and there was nothing listed between Spearville and Dodge City at that time. This 1883 Santa Fe map is insanely cool but only lists Dodge, Wright, and Spearville. But here it is on this 1920 Kansas railroad map.

The announcement of its closing was the first mention I was able to find in the local newspapers.

I had only a vague idea of where it was located and since the town boundaries have stretched dramatically over the years, learning it was six miles east of Dodge didn’t help much. Isn’t Wright considered six miles east of Dodge now? But it was still used as a landmark and I was able to use the legal description from this adjacent lot to narrow it down somewhat.

Terrific…let’s check out the maps.

I zoomed in on those 11.36 acres, which helped, but still left five possibilities. But Lot 17 doesn’t make any sense on the old plat maps or the current parcel map.

So I looked at a later map that included irrigation ditches. It makes sense to have this near a jerkwater station but did it actually go under the tracks? I have no idea what the well situation was like out there.

This really doesn’t help. I went though the big book at the Ford County Register of Deeds office and found T. F. Garner had Lots 1 & 2 in Section 22. So the ad in the paper showing Lot 17 could have been the product of sloppy handwriting or lack of proofreading. In the current context, it wouldn’t make sense for Lots 1 & 2 to be near the middle of the section but if you scroll back up to the 1905 map, you’ll see the bottom row of lots was still part of the Fort Dodge Military Reservation.

But this article does help…maybe. Most winter storms come with a north wind and if the blocks ended up on the tracks, then I guess it had to be a parcel on the north side of the tracks.

So this article about a derailment at Beeson mentions a (water?) tower still in existence in 1911.

Here we have mention of a side track going north from Beeson up to the new ballast field.

The current GIS survey map shows a side track going north to the Koch plant.

And the road referenced below is 116 Road.

And that’s it…the last mention of the Beeson station. Having nothing else to go on, it was time to take a walk down the rails. So just understand, I like riding on trains but I know nothing about them. I used to ship plywood to Mexico, you guys. That’s the extent of my knowledge. But I’m pretty sure the rail bed has moved a bit over the past 100 years. So I just started walking and taking photos on both sides of the existing tracks to see if there were any markers or debris that looked interesting.

There were a couple spots directly behind the Koch plant that looked promising. Lots of broken up concrete, some blocks, a well, and wide spots along the rail siding that goes to Hi Plains Feed. One of my questions is whether the old AT&SF line was converted to private sidings once the old tracks were replaced. Anyone?

There has been so much construction in this area that I just don’t know what is old and what isn’t. But I did find this cool lock. And yes, I put it back exactly where I found it.

I was able to confirm the information I had found with the Kansas Heritage Center in Dodge. The Register of Deeds office was extremely helpful in my search. After looking through the giant book listing property transfers in Section 22, I was taken downstairs to the GIS/Survey Department. Ben and Jessica enjoy solving mysteries and Jessica found a railroad map from 1985 that still had Beeson listed between mile markers 347 and 348.

This map seems to confirm that T. F. Garner used the word “adjacent” a bit loosely in his 1910 auction advertisement. Ben took another look at the GIS map and pointed out these little notches along the tracks.

He said those notches had to come from work done by a woman named Theresa, who worked at the Ford County Appraiser’s Office for a million years. She made ridiculously detailed notes, especially whenever something interesting crossed her desk. Those notes often found themselves attached to files in the records closet. He suggested I go to the Appraiser’s Office and beg for access to those files. HA!

So I made my second hike of the day up the Lora-Locke stairs and am pretty sure those ladies thought I came from Mars. I left my contact information and do not expect to hear from them…like…ever. Not that I can blame them. But honestly, I would be happy to sit in the file room and look for myself. It’s not like this is top secret information.

Anyway, Ben also gave me contact information for a Survey Coordinator with the State of Kansas, who probably also decided I’m insane when my email landed in his inbox. I also emailed the Kansas Historical Society to see what they have in their collection that isn’t available online. They have so many AT&SF records but they aren’t necessarily named so that you have a good idea of their relevance. Finding aid? Pish posh!

Barring any additional evidence to the contrary, here’s where I think the Beeson station was located. We know the station was just west of mile marker 347.

If you compare the 1985 railroad map to the current GIS map, it appears to basically straddle the southwest and southeast quarters of Section 22…right near the switch for the Koch rail siding that goes to the north. And the 1913 article mentioned a line being installed that led to the ballast field 4 miles north of Beeson.

So there you have it. I’ll post updates if I receive any additional information but as of right now, I’m calling this mystery solved.

If you like what you see, be sure to subscribe (way at the bottom of the post on mobile devices) to receive an email each time a new post is published and share on social media. You can also buy me a cup of coffee using the donation form. Thanks for reading!

Your support keeps the caffeine flowing! Make a one-time donation. Your contribution is appreciated!